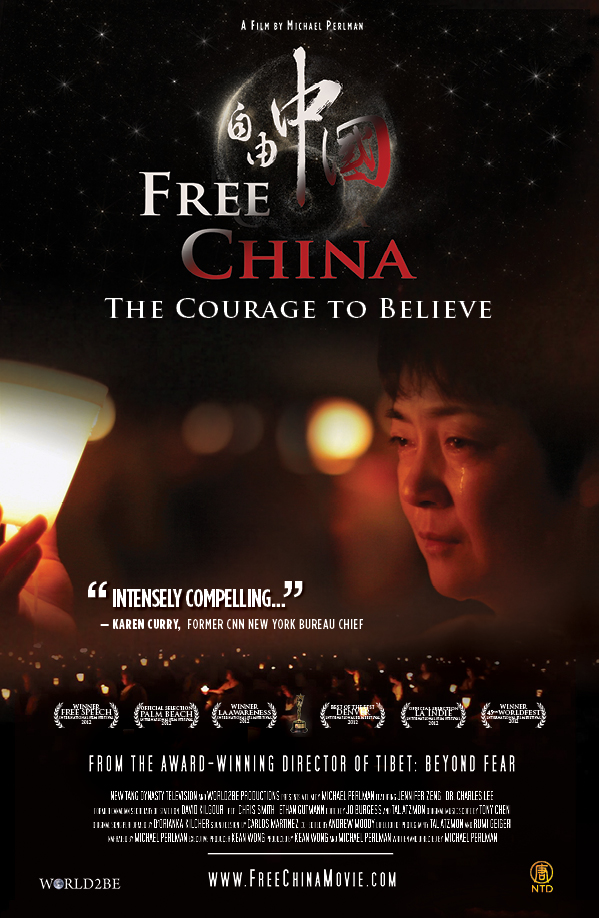 Bound by a common conviction, the fates of a woman living in Beijing and a man living in New York become inextricably linked in a story of courage and freedom…

The award winning “Free China: The Courage To Believe” (2014 Oscar Contender for Best Documentary, Best Original Score and Best Original Song) tells the true story of a mother and former Communist Party member, Jennifer Zeng, who along with more than 70 Million Chinese were practicing a belief that combined Buddhism and Daoism until the Chinese Government outlawed it. The Internet police intercepted an email and Jennifer was imprisoned for her faith. As she endured physical and mental torture, she had to decide: does she stand her ground and languish in jail, or does she recant her belief so she can tell her story to the world and be reunited with her family? A world away, Dr. Charles Lee, a Chinese American businessman, wanted to do his part to stop the persecution by attempting to broadcast uncensored information on state controlled television. He was arrested in China and sentenced to three years of re-education in a prison camp where he endured forced labor, making amongst other things, Homer Simpson slippers sold at stores throughout the US.

With more than one hundred thousand protests occurring each year inside China, unrest among Chinese people is building with the breaking of each political scandal. As China’s prisoners of conscience are subjected to forced labor and even organ harvesting, this timely documentary exposes profound issues such as genocide and unfair trade practices with the West. The film also highlights how new Internet technologies are helping bring freedom to more than 1.3 billion people living in China and other repressive regimes throughout the world.

“Free China” is a co-production between NTD Television, World2Be Productions and Parigon Partners

“2014 OSCAR CONTENDER FOR BEST DOCUMENTARY & A GRASSROOTS PHENOMENON…”
Screened at over 1,500 venues in 41 countries and in 27+ languages around the world including…

Interviewees in the film:

Ethan Gutmann, Author of “Losing The New China” and Contributor for The Asian Wall Street Journal

(The film is in English and has English & Chinese Subtitles, and will be available in over 20 languages in 2015/16)